To communicate with the PayServer from your POS Software you can use the PayProtocol (P3), which is designed specifically for easy payment integration. This protocol is platform and technology agnostic, all you need is a TCP socket, which is available on all major platforms. 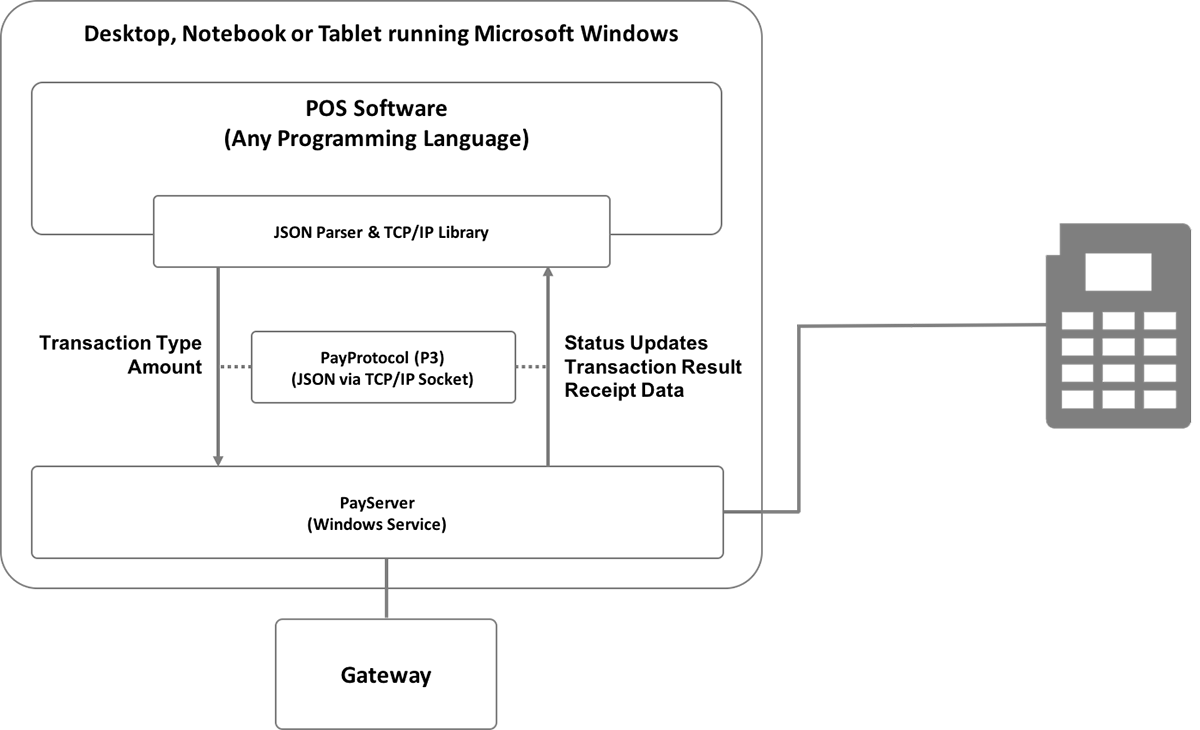 We also offer the PayClient, a ready-made library that implements the protocol in C#/.NET. If your system uses these technologies we highly recommend you use this library instead of doing your own implementation. The PayClient provides all the functionality of the protocol encapsulated in a easy-to-use, native API.
Message Transport
The P3 protocol itself only defines the messages exchanged between the client and the server. The server supports two transport layer protocols used to deliver the messages: WebSocket and framed TCP.
P3 over WebSocket
This option makes use of the modern and high-level WebSocket protocol. This protocol is based on top of TCP so it is technically possible on all platforms, however, depending on your technology and language it might not have an available implementation. An advantage of this protocol is that, if it is already implemented in your technology, it provides a much simpler integration for you. It is also implemented in all modern web browsers, so you can use it to integrate a card reader with your web-based POS Software or eCommerce System.
The WebSocket protocol the PayServer uses adheres to WebSocket 13 specification (RFC 6455), which defines the initial handshake, message framing and fragmentation as used by the server. We recommend using a pre-made implementation library rather than implementing WebSocket from scratch; if such library is not available for your technology it is better to use our second transport option.
P3 over TCP
This option makes use of the relatively low-level TCP protocol, which is natively implemented on all major platforms and should be available from all languages and technologies. However, because of its simplicity, it takes more of an effort to implement.
On the TCP level all messages are simply a stream of bytes. To distinguish the messages, length prefix framing is used to specify the length of the message in big-endian order. This framing results in each application message being prefixed by a 4 byte header. The application message itself is a UTF-8 encoded JSON.
Therefore, to read a message, you would first read four bytes of the input stream as an unsigned integer X. Then you would read the next X bytes of the actual application message, which you process as a UTF-8 string. Similarly, to send a message, you first calculate its size in bytes and send this value as a 4 byte unsigned integer, then the message. A standard caveat of this transport protocol is that the message may be split into multiple packets and not received at the same time.
Messaging Pattern
The P3 protocol is based on the classic request-response messaging pattern. For each request the client sends it can expect exactly one corresponding response from the server. However, contrary to some other popular protocols, the response doesn't have to be returned right away or before another request. Some requests, such as a request to execute a transaction, may produce long running operations. For these cases the protocol makes an extension to the request-response model. The protocol includes:
Every request the client sends needs to contain a
tag
, which allows you to keep track which update, action or response message is related to the request you've sent. Your implementation needs to provide a unique
tag
value for each request you make. We suggest generating a UUID for this.
For example when running an
EXECUTE_TRANSACTION_REQUEST
with
tag
ea99bacc-c05e-4cb5-b2c1-858172124873
, you will receive this tag in all subsequent
EXECUTE_TRANSACTION_UPDATE
,
EXECUTE_TRANSACTION_ACTION
and
EXECUTE_TRANSACTION_RESPONSE
messages.
Further, when you request a transaction, you send in the path to the device which you wish to use for the transaction.
Message Structure
The messages defined by the P3 protocol are formatted in JSON.
Message Header
Every message includes the same header fields:
All possible message types are described in detail on a separate message specification page.
The
resource
specifies a configured resource for which is the message intended. If there is none the field is
null
or can be omitted.
As mentioned, there are four categories of messages:
request
,
response
,
update
and
action
. The response messages also include status and error information in the header:
The
status
is
OK
if the message was processed by the server and correctly executed. If there was something wrong with the execution, the message status is
ERROR
.
The
error
field is non-null if and only if the
status
of the response is
ERROR
. In some cases, there may still be a response body to according to the message type; for example, if you are executing a transaction which failed at a later stage, you can find the transaction data inside the message body.
Message Data
The data for each message is embedded in a field with the same name as the message type, but converted to lowerCamelCase. For example, if you send a
LOGIN_MERCHANT_REQUEST
you should also populate field
loginMerchantResponse
in the message JSON object. Similarly, when the server sends a
LOGIN_MERCHANT_RESPONSE
you can expect only the
loginMerchantResponse
field of the message to contain the message type specific data.
Message Specification
All the message types and their message data supported by the P3 protocol are specified in message specification.
Protocol Usage
Usage of the protocol and sample message flows are shown in protocol usage.